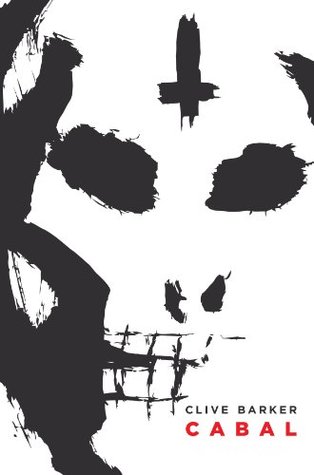 Cabal is the story of Boone, a tortured soul haunted by the conviction that he has committed atrocious crimes. In a necropolis in the wilds of Canada, he seeks refuge and finds the last great creatures of the world – the shape-shifters known as the Nightbreed. They are possessed of unearthly powers-and so is Boone. In the hunt for Boone, they too will be hunted. Now only the courage of this strange human can save them from extinction. And only the undying passion of a woman can save Boone from his own corrupting hell…

This novella is the basis for the Major Motion Picture – Nightbreed. (via Goodreads)

Why was I interested in this book?
I rewatched Nightbreed during Readers Imbibing Peril, or rather I watched a longer cut which is sort of a director’s cut—there are several versions of the film due to the back and forth between Barker (who directed), the studio, and, later, fans. I’m a bit of fan of the movie and the concept of the Nightbreed and I got curious about the book. Again. I’ve owned the book in the past; bought it in high school and sold it in college, mostly unread, to a used store for end-of-the-semester cash…

What Worked
The movie, and the blurb above, focus mostly on Boone and his journey into accepting his new life/death as the destroyer/savior of the Nightbreed. One of the things I liked most about the book was Lori’s story. In the movie, there’s kind of a “love of a good woman” vibe. In the book, Lori is more motivated by her realization that there could be more than just being human. Also, lust plays a bigger factor in her decision than love. The Nightbreed movie glazes over the sex that is present in the book in a way that Barker’s Hellraiser movies doesn’t.

What Didn’t Work
I don’t remember why the book didn’t catch with me the first time around. The movie is fairly faithful to the text, even the theatrical version which is the only one I would have seen at the time. I’m guessing that what I really wanted then (and now) was more of the Nightbreed and was impatient with beginning with Boone. The Nightbreed are a group of monsters, some of which can hide their forms. What are their stories?

And what was with the title?

Oddly, one of the things I like best about this book is that it leaves the story open to be a series…which Barker has never written. As readers, we never get the full idea of what that intrigue might be. (There are some comics that presumable extend the story, but I haven’t read them.)

Overall
Barker always feels a little disjointed to me, but Cabal is a simpler story, not as deep in philosophies, but holds together better.