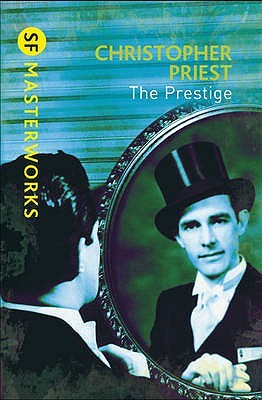 The Prestige by Christopher Priest

In 1878, two young stage magicians clash in the dark during the course of a fraudulent seance. From this moment on, their lives become webs of deceit and revelation as they vie to outwit and expose one another.

Their rivalry will take them to the peaks of their careers, but with terrible consequences. In the course of pursuing each other’s ruin, they will deploy all the deception their magicians’ craft can command–the highest misdirection and the darkest science.

Blood will be spilled, but it will not be enough. In the end, their legacy will pass on for generations…to descendants who must, for their sanity’s sake, untangle the puzzle left to them. (via Goodreads)

Why was I interested in this book?
This is a reread for me. Sometimes, I get so caught-up in ARCs and the unread books in my “pile” that I don’t let myself reread intriguing books that I enjoyed the first time around. Boy, am I glad I decided to reread The Prestige.

What Worked
I first read it in 2010, about two years before my earnest interest in magic took hold. From the my standpoint as a slightly-beyond-layman, Priest knows his stuff magic-wise. Previously, I didn’t fully appreciate the differences between Borden and Angier’s performance philosophies. The division between dedication to theory and dedication to end-performance still exists in a world  that contains both Ricky Jay and David Blaine.

The voices of the two magicians (and Andrew and Kate in the modern wrap-around) are clear and distinctive. This is something I didn’t appreciate the first time I read the story. I also didn’t fully appreciate the crossing events in the narrative. Basically, we’re given two separate (and incomplete) narratives; first Borden’s and then Angier’s. And that’s it. Despite having two modern characters working to make sense of the narratives, readers are left to fit pieces together without any extra-narrative interference. It’s a nice puzzle of a novel.

What Didn’t Work
We won’t talk about the science…

Also, Andrew and Kate in modern times are the least interesting portion of the novel, aside from the rather tense last five pages.

Overall
I’ll echo what I said in my first “review” of The Prestige: I wish I had read the book before seeing the movie. The movie is much different (how did I forget that Angier started out as fraudulent medium in the book?), but there are two major plot points —the twists—that are paralleled. But now that I’ve also seen the film probably a dozen more times, I’m further impressed by how well the adaptation works. Stakes needed to be higher in the movie. So, kudos to Jonathan and Christopher Nolan for creating a story that is the prestigious twin  of the book.