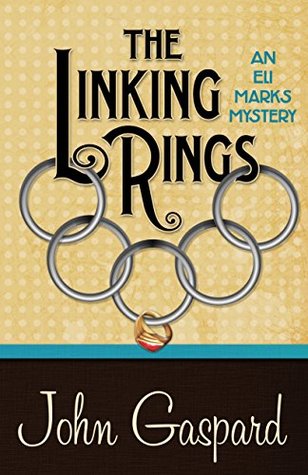 The Linking Rings by John Gaspard

What does Eli Marks have up his sleeve this time? Well, let me tell you, no matter the mystery, his sleight of hand always does the trick.

Eli’s trip to London with his uncle Harry quickly turns homicidal when the older magician finds himself accused of murder. Not Uncle Harry!

A second slaying does little to take the spotlight off Harry. Instead it’s clear someone is knocking off Harry’s elderly peers in bizarrely effective ways. But who?
The odd gets odder when the prime suspect appears to be a bitter performer with a grudge…who committed suicide over thirty years before.

While Eli struggles to prove his uncle’s innocence—and keep them both alive—he finds himself embroiled in a battle of his own: a favorite magic routine of his has been ripped off by another hugely popular magician.

What began as a whirlwind vacation to London with girlfriend Megan turns into a fatal and larcenous trip into the dark heart of magic within the city’s oldest magic society, The Magic Circle. (via Goodreads)

Why was I interested in this book?
This is the 4th Eli Marks mystery. The first, The Ambitious Card, established Eli as our working magician and amateur sleuth protagonist. I’ve enjoyed the whole series.

What Worked
Gaspard’s details about magic and the social aspects surrounding magicians are always great. Magicians have a strange dynamic of friendship/rivalry which I’m not sure exists in other industries. It’s a lot of fun and adds a certain amount of drama to situations.

The setting of The Linking Rings shifts away from the Twin Cities in Minnesota to London. While the sense of place isn’t as strong, I never doubted Eli and Harry jumping from tube station to tube station as murders happen around them.

What Didn’t Work (as much)
Set in London, this volume of the series doesn’t have one of the relationships that have made the other mysteries work better: Eli’s district attorney ex-wife and her cop fiance.  Without these hooks into the investigation, the clues in The Linking Rings just sort of accumulate around Eli. While he’s instrumental in the climax of the story, solving of the mystery feels abrupt.

Overall
This is a fun, honest mystery. Eli Marks is a great character and I’m hoping that John Gaspard continues to provide magic in future books.