This book was provided to me by Bloomsbury USA via NetGalley in exchange for an honest review. 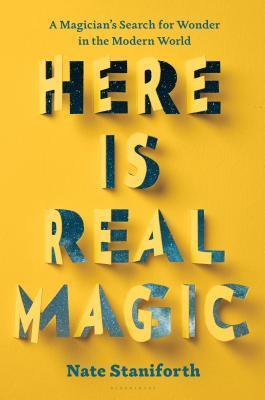 Here Is Real Magic: A Magician’s Search for Wonder in the Modern World by Nate Staniforth

Nate Staniforth has spent most of his life and all of his professional career trying to understand wonder—what it is, where to find it, and how to share it with others. He became a magician because he learned at a young age that magic tricks don’t have to be frivolous. Magic doesn’t have to be about sequins and smoke machines—rather, it can create a moment of genuine astonishment.

The paradox is that the better you get at creating wonder with magic for other people, the harder it gets to experience it yourself. After years on the road as a young professional magician, crisscrossing the country and performing four or five nights a week, every week, Nate was disillusioned, burned out, and ready to quit.

Instead, he went to India in search of magic. Here Is Real Magic follows Nate Staniforth’s evolution from an obsessed young magician to a broken wanderer and back again. It tells the story of his rediscovery of astonishment—and the importance of wonder in everyday life—during his trip to the slums of India, where he infiltrated a three-thousand-year-old clan of street magicians. Here Is Real Magic is a call to all of us—to welcome awe back into our lives, to marvel in the everyday, and to seek magic all around us. (via Goodreads)

“Do you want to keep doing magic?”

“Do you want to do anything else?”

If you replace “doing magic” with “writing,” I’ve pretty much had this same conversation in the recent past with Eric, my husband. Staniforth has it with his wife after several years of successful touring as a magician. He had fallen out of love with magic, so to speak. The wonder he originally felt when doing magic and had seen on the faces of his audience had faded. This book is the travelogue of his trip to India to find wonder again.

There is an aspect of this books that makes me somewhat uncomfortable. I’m aware of the cultural appropriation that occurred within magic in the late 19th/early 20th century. The exotic Far East was all the rage and many western magicians took on the persona of Indian fakirs for tricks. The Indian rope trick, a hoax, only solidified the notion that people in India believed in mysticism and needed civilizing. Staniforth is aware of this too. He mentions Peter Lamont’s The Rise of the Indian Rope Trick both in the text and in his acknowledgements, yet, when he wants to see “real” magic, India is his first (only?) thought.

I can understand the want to visit a radically different culture in an effort to find a new perspective on magic. India has that, but Staniforth also shares his notion that wonder comes easier when you’re less burdened with knowledge. Which leave the possibility of an uncomfortable a==b==c comparison. I don’t think that Staniforth intends that, and he’s pretty quick to check his privilege, but why then just India? Why not travel the world looking for wonder?

It’s hard to critique someone’s personal experience of the world. Staniforth is very earnest in his want to find wonder and inspire it in others. That also occasionally comes off as self-importance. He insists that magicians are a ridiculous lot and he isn’t satisfied with the wonder of magic only lasting to the theater door. I’m in the ridiculous profession of creating stories, but I don’t mind so much if the magic of the story fades when the book is closed. I also don’t have much trouble finding moments of wonder in my life,  but I’m the sort that finds a rainbow to be more incredible because of the optics behind it.

Staniforth does find wonder, but finds it more in the people and beauty of India than in its magicians. His take-away is that we can find wonder when you slow down and let yourself. And really, I can’t argue with that.