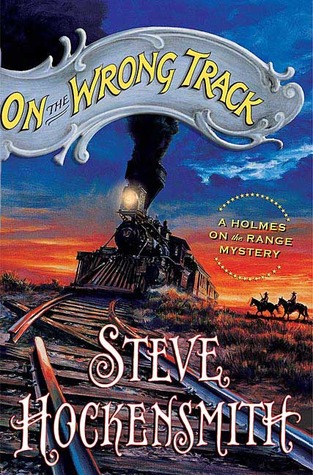 On the Wrong Track by Steve Hockensmith

It might be 1893 and the modern world may in full-swing, but cowboy Gustav “Old Red” Amlingmeyer is an old-fashioned kind of guy: he prefers a long trail ride even when a train could get him where he’s going in one-tenth the time. His brother Otto (“Big Red”), on the other hand, wouldn’t mind climbing down from his horse and onto a train once in a while if it’ll give his saddle-sore rear end a rest. So when it’s Old Red who insists they sign on to protect the luxurious Pacific Express, despite a generations-old Amlingmeyer family distrust of the farm-stealin’, cattle-killin’, money-grubbin’ railroads, Big Red is flummoxed. But Old Red, tired of the cowpoke life, wants to take a stab at professional ‘detectifying’ just like his hero, Sherlock Holmes and guard jobs for the railroad are the only ones on offer.

So it is that Big Red and Old Red find themselves trapped on a thousand tons of steam-driven steel, summiting the Sierras en route to San Francisco with a crafty gang of outlaws somewhere around the next bend, a baggage car jam-packed with deadly secrets, and a vicious killer hidden somewhere amongst the colorful passengers.

On the Wrong Track, Old Red and Big Red’s much anticipated return, is filled with all of the wit, flavor, humor, and suspense that made Hockensmith’s debut, Holmes on the Range, so beloved by critics and fans alike. (via Goodreads)

Why was I interested in this book?
I read Holmes on the Range, the first book in this series, in late 2016. Only a year between the first and the second? I amaze even myself!

What Worked
I really enjoy the set up of Hockensmith’s Holmes on the Range books: Gustav Amlingmeyer, a cowhand in the 1890’s American west, knows Doyle’s (or rather Watson’s) tales of Sherlock Holmes. He’s taken with the notion of “deducifying” and wants to be a professional detective. He is also illiterate, having worked labor-intensive jobs to keep his family afloat since he was young. His brother Otto is a big strong guy, but has been given a clerk’s education. Together, the brothers are a complementary team, even if they don’t always get along. They’re brother’s after all. Against the backdrop of the Old West, the brothers encounter and solve mysteries.

On the Wrong Track involves a mystery set aboard a train bound to San Francisco. It’s a good mystery with enough clues and events to keep the brothers and readers busy.

I read this soon after reading “The Huge Hunter: Or, the Steam Man of the Prairies” by Edward S. Ellis. The Steam Man, an giant robot man made to pull a wagon, was the subject of a series of dime novels in the latter half of the 19th century. As with a lot of late 19th century fiction, Ellis felt the need to give accents to characters of different backgrounds. The Irishman character, McSquizzle, is nearly incomprehensible. Thank goodness we’ve moved beyond that. While Hockensmith has the brothers (and others) use quite a bit of western slang, it reads easy.

What Didn’t Work
A minor annoyance: sometimes Otto (our POV brother) is a bit repetitive. I can understand wanting to get certain things solid in a reader’s mind, but I think Hockensmith can have a little more faith in his audience. This is a very minor point.

Overall
Honestly, my best reading this year has been “fun” reading. The Holmes on the Range series isn’t high art, but it’s entertainingly written and plotted. Sometimes, that’s more than enough.

This is my first book for the Wild West Reading Challenge!

3 thoughts on “Review ~ On the Wrong Track”