This book was provided to me by University of Minnesota Press via NetGalley in exchange for an honest review. 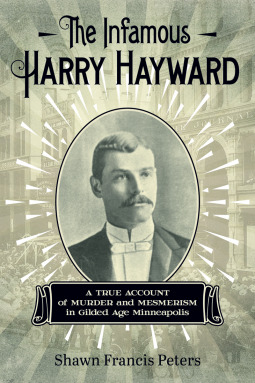 The Infamous Harry Hayward: A True Account of Murder and Mesmerism in Gilded Age Minneapolis by Shawn Francis Peters

On a winter night in 1894, a young woman’s body was found in the middle of a road near Lake Calhoun on the outskirts of Minneapolis. She had been shot through the head. The murder of Kittie Ging, a twenty-nine-year-old dressmaker, was the final act in a melodrama of seduction and betrayal, petty crimes and monstrous deeds that would obsess reporters and their readers across the nation when the man who likely arranged her killing came to trial the following spring. Shawn Francis Peters unravels that sordid, spellbinding story in his account of the trial of Harry Hayward, a serial seducer and schemer whom some deemed a “Svengali,” others a “Machiavelli,” and others a “lunatic” and “man without a soul.”

Dubbed “one of the greatest criminals the world has ever seen” by the famed detective William Pinkerton, Harry Hayward was an inveterate and cunning plotter of crimes large and small, dabbling in arson, insurance fraud, counterfeiting, and illegal gambling. His life story, told in full for the first time here, takes us into shadowy corners of the nineteenth century, including mesmerism, psychopathy, spiritualism, yellow journalism, and capital punishment. From the horrible fate of an independent young businesswoman who challenged Victorian mores to the shocking confession of Hayward on the eve of his execution (which, if true, would have made him a serial killer), The Infamous Harry Hayward unfolds a transfixing tale of one of the most notorious criminals in America during the Gilded Age. (via Goodreads)

What Worked
This is a nice look into Minneapolis at the end of the 19th century. It was, like many Midwestern/Heart Land cities, on the rise full of hustle, bustle, excitement, and vice. Harry Hayward dabbled in many areas of crime and Peters gives each a good deal of background of their own. I especially enjoyed learning about the counterfeiting and money laundering schemes.

Another crime-adjacent subject important to the story is yellow journalism. Much of Hayward’s reputation as a “master criminal” was made in the press. Dueling newspapers didn’t entirely fabricate stories, but they certainly latched on to the juiciest, most lurid tidbits of the police’s initial investigation and Hayward’s trial. To an extent, the “Murder and Mesmerism” subtitle of this book has similar sensationalism. The mesmerism aspect of Hayward is really very minor. I hoped that this would be the story of an out-and-out charlatan performer, a hypnotist using his abilities to bilk and murder! Alas, not the case, though it seems strange that I should be disappointed by a charismatic con man and the murder of a young woman.

What Didn’t Work
A very minor thing: There was some repetition of details between the telling of what happened to Kitty Ging and Hayward’s eventual trial. This is a slight stumbling block with true crime: to tell about the crime accurately, an author ends up using facts based on the testimony of those involved.

Overall
Good telling of a historical true crime. Peters has a light touch with his presentation of details and keeps the narrative rolling.