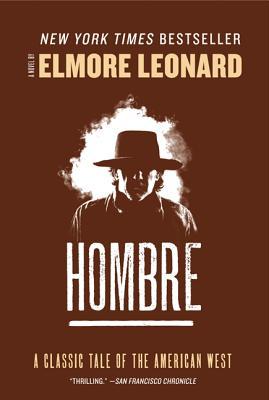 Set in Arizona mining country, Hombre is the tale of a white man raised by Indians, who must come to the aid of people who hate him when their stagecoach is attacked by outlaws. As thrilling as [Leon’s] contemporary novels of crime, double-cross, and murder in Detroit and Miami, Hombre is Elmore Leonard at his riveting best—no less than one would expect from the creator of U.S. Marshal Raylan Givens (Justified). (via Goodreads)

Why was I interested in this book?
I may or may not have only signed up for the Wild Wild West Reading Challenge in order to have an excuse to read Elmore Leonard westerns.

Justified is perhaps my favorite TV show ever—it’s based on character and situation created by Leonard. It led me to a collection of his short fiction and ultimately to the very first proper western that I had ever read, Gunsights in 2012.

What Worked
Honestly, I think Leonard does westerns better than contemporary crime fiction. In many ways, Justified feels more like a western than crime drama.  Or at least what he does well is what one *thinks* of as a western. There’s a level of heightened action, one might even say melodrama, that works well in a cinematic notion of the Old West. (It works well in crime noir too, but that’s a genre that I’m not as fond of.) But on the other hand, there isn’t anything in Hombre that I would point at as being too modern. The story pays attention to things like the state of horses, amounts of water, or qualities of darkness.

While I wouldn’t say that Leonard’s strength is environment, it’s certainly the version of Arizona that I marvel at every time we take a car trip. How anyone spent days crossing mountains and expanses of cactus-filled nothingness by horseback/wagon is amazing to me. An eight-hour drive to California with a IHOP stop in Yuma is pretty much all I can take.

What Didn’t Work
In this case—with a first person POV—very informal narrative voice worked well, but that isn’t always the case with Elmore Leonard. One of his most famous quotes about writing is: “If it sounds like writing, I rewrite it.” Some times, I don’t think that works. Some times, a reader wants steady clarity of narrative. Again, I didn’t have this problem much with Hombre.

Overall
It’s been another indecisive reading month for me. This was a nice change-up from what I had planned. There will be more Elmore Leonard later in the year.