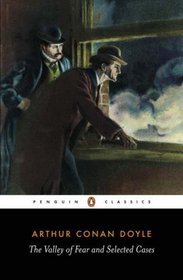 The Valley of Fear by Arthur Conan Doyle

A coded warning sends Sherlock Holmes and Dr. Watson to a country retreat, where they follow a perplexing trail of clues to unmask a murderer — and to break the stranglehold of a terrorist cult. (via Goodreads)

Why was I interested in this book?
Doyle’s Sherlock Holmes stories are some of my favorites. I’m doing a reread of the stories, many of which I haven’t read in a long while, in their narratively chronological order. (This was not my idea—Noonlight Reads set this challenge at the beginning of last year. I wasn’t able to take part then, but I decided to give it a shot starting this year.)

What Worked
Like A Study in Scarlet, The Valley of Fear is split into two parts, the second of which provides background and is set in the United States. What works best is, of course, the initial Holmes mystery. It even provides some Moriarty context, although within the chronology of Doyle’s writing, this story comes over twenty years after Moriarty’s debut (I think) in “The Final Problem.”

What Didn’t Work
So, in 1893 , Doyle writes what he hopes will be his final Holmes story, “The Final Problem.” Just to make sure, he kills Holmes off. He’s tired of the franchise and wants to move on. The public, though, has an insatiable appetite for Holmes (we still do, it seems).  Doyle eventually writes The Hound of the Baskervilles, a retro story, and then officially brings Holmes back from the dead in 1903 in “The Adventure of the Empty House.” Another decade after that, Doyle is still writing Holmes…

In the narrative chronology, the story immediately after The Valley of Fear is “A Scandal in Bohemia.” The second Holmes story published (I believe), “Scandal” is one of the most beloved Holmes mysteries and for good reason. The language and the story sparkle. In comparison, the Holmes portion of Fear feels workman-like and the melodramatic American section feels like a story Doyle would rather be telling.

Overall
End of the day, The Valley of Fear *is* Sherlock Holmes and it does add to the cannon with Moriarty tidbits. It’s a bit better than many of the secondary works that will come later when Doyle finally does write his last Holmes story.