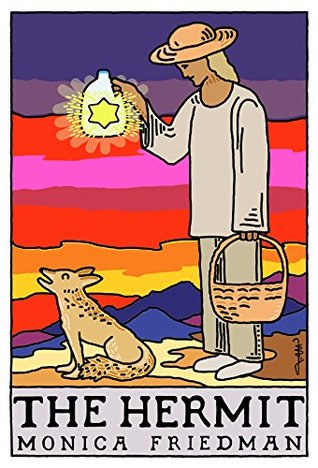 The Hermit by Monica Friedman

The Sonoran Desert is full of life, but that doesn’t mean it won’t kill you.

Kaija Mathews doesn’t want to talk to anyone, ever, so she’s hiding in a cave in the desert all alone. Or, she would be all alone if fifteen years of deep meditation beside a magic spring hadn’t cursed her with the ability to converse with animals. The other creatures always respected her privacy, until the massacres began. Suddenly, she can’t get rid of the local fauna and their stories of an insatiable monster that kills without ceasing, leaving an unearthly stench in its wake. Only a holy woman, they say, can defeat it. Kaija’s no saint, but if she’s ever to enjoy her solitude again, she’ll have to play along.

Worse, she’ll need to face the challenges of the world she abandoned, obstacles like her nightmare of an ex-husband, and a drifter half her age who feels like a sweet dream. To do battle with a bulletproof monster straight out of North American mythology, Kaija must learn what it means to stare down fear, when to fight, and most of all, how to answer hatred with love. (via Goodreads)

Why was I interested in this book?
K. J. Kabza recommended this book. Dang it, he’s a good writer and he has good taste…

What Worked
First off, content warning: there are spiders in this book. Yes, there are also coyotes, packrats, javelina, and even a creosote bush with personality, but there are also spiders. Many, many spiders. Friedman works many Native American myths and lores into this story and one of them is Spider Grandmother. Despite my problems with spiders, I got through it. In fact, there are a few times when Brown (a brown recluse) adds some deeply funny dark humor to the proceedings.

The pace of this story is rather slow, and that’s okay. It fits. Even in the cities, the desert isn’t a fast place. The stories, Kaija’s, Little Brother’s, the monster’s, all unspool gradually. And stories are very important to this narrative. Kaija, a librarian before she was a hermit, gains knowledge when she learns to listen to stories again. Kaija’s character arch is also long. She resists change for most of the book, believing that she’s living her best life rather than just hiding. Oh, and kudos for the pairing of a middle-aged woman with a younger man. I do love Peter S. Beagle, but his older-men/younger-women plots are getting old.

I love books with a strong sense of setting and, while being transported to somewhere else is often nice, I also enjoy reading about the places I am more familiar with. This book is set in Arizona, in the Sonoran Desert. I’m not a camper or a hiker, but we’ve driven through the desert many times and I find that I do love its beauty and its harshness in my own city-girl kind of way.

What Didn’t Work
There was a level of wrap-up at the end of the book that felt weird to me. The resolution involves magical elements overlapping with dead-serious real elements. I kept expecting the mythological to sort of fade out of the story or not be seen by the “real.” End of the day, the monster, Eagirl, killed people. While her mystery is solved, there are still…dead people. And that gets sort of ignored by the police who are involved at the end. Would I be happier if I was given some “all a dream” type explanation? No, probably not. I don’t know a way around it.

Overall
I enjoyed this book. Often, my continued reading (or even watching, in the case of TV and movies) comes down to the answers to two questions: Is this setting somewhere I want to be? Are these characters people I want to spend time with? When the answer is yes to both, I’m a happy (city-girl) camper.

Random trivia: I didn’t realize until after I finished The Hermit, but Monica Friedman and I have stories in the same issue of Bards and Sages Quarterly!

3 thoughts on “Review ~ The Hermit”