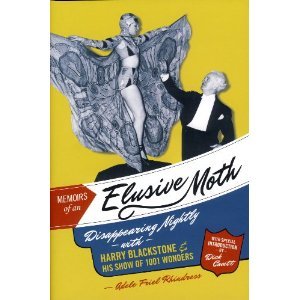 Memoirs of an Elusive Moth: Disappearing Nightly with Harry Blackstone and his Show of 1001 Wonders by Adele Friel Rhindress

Harry Blackstone presented a full-evening production called the Show of 1001 Wonders. It lived up to that billing, as a stage-filling spectacle combining spectacular illusions, magnificent costumes, gorgeous girls, a corps of assistants, humor, dancing, and intimate conjuring, into a magnificent stage production. Blackstone toured North America ceaselessly and by 1947, after over four decades entertaining the public, was unquestionably one of America s greatest and best-known magicians. It was in that year, at the age of 17, that Adele Friel was swept into Blackstone’s world of magic. She joined the ranks of his show unexpectedly, making the transition from solo song-and-dance act to one of Mr. B’s gorgeous girls in the blink of an eye. It was a decision that would change her life. For the next three seasons, she trouped with Blackstone, playing an integral role in his show, both onstage and backstage. Memoirs of an Elusive Moth gives readers a rare and intimate first-person account of one of America’s greatest touring magic shows. Laid bare in its pages are many of the secrets behind Blackstone s magic, as well as details of life in the theater, behind the scenes, on the road, and more all told here for the first time. (via Goodreads)

Why was I interested in this book?
Books about and by female magicians and magician’s assistants are fairly rare (at least in my experience). And, honestly, I’m almost more interested in assisants’ stories. In big illusions, it’s really the assistant who does a lot of the work. So, I was pretty happy to pick up this book fairly inexpensively earlier in the year.

What Worked
Memoirs of an Elusive Moth is an eloquent, though brief, accounting of Adele Friel Rhindress’s time working with Harry Blackstone’s Show of 1001 Wonders. I had originally slated this book for later in the month, but for NaNoWriMo, I’m writing a character who ends up as a magician’s assistant, so I decided to bump it up. Rhindress’s story and the one I’m writing are not the same, but hers definitely gives mine some context. One of the things that I was surprised about was how quickly Rhindress was included in the show. She was pretty much hired and in the show as soon as costume fittings were done. I would have thought that a little more training would be required to be a “box jumper” in a huge 1947 magic stage show.

Rhindress doesn’t rub shoulders with many other magic celebrities, as seems to happen in magician memoirs, but instead she gives a better view of what happens behind the scenes. The secrets behind a few illusions are mentioned; something to be aware of if you’re sensitive about those sorts of things. Rhindress also learned a little sleight of while traveling with the troupe.

One of weaknesses of Donald Brandon’s …Memoirs and Confessions of a Stage Magician was a lack of dates and chronology. Memoirs of an Elusive Moth avoids this problem. Rhindress was helped by a diary kept by her colleague Nick Ruggiero.

What Didn’t Work
Really, the only thing I wanted was more. The writing is better than competent. The books is a well-made hardback with plenty of photos. Alas, it’s only 116 pages!

Overall
I really enjoyed learning more about magic behind the scenes in the late 1940s-early 1950s. I’ll have more about women in magic in Monday’s #NonFicNov “Be the Expert/Become the Expert” post.