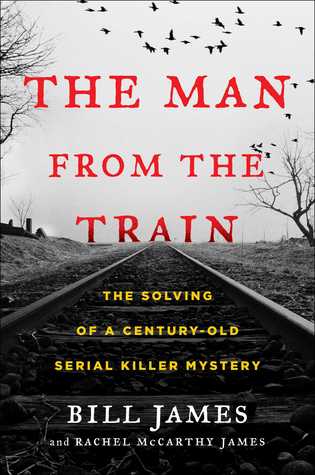 The Man from the Train: The Solving of a Century-Old Serial Killer Mystery by Bill James & Rachel McCarthy James

Between 1898 and 1912, families across the country were bludgeoned in their sleep with the blunt side of an axe. Jewelry and valuables were left in plain sight, bodies were piled together, faces covered with cloth. Some of these cases, like the infamous Villasca, Iowa, murders, received national attention. But few people believed the crimes were related. And fewer still would realize that all of these families lived within walking distance to a train station.

When celebrated baseball statistician and true crime expert Bill James first learned about these horrors, he began to investigate others that might fit the same pattern. Applying the same know-how he brings to his legendary baseball analysis, he empirically determined which crimes were committed by the same person. Then after sifting through thousands of local newspapers, court transcripts, and public records, he and his daughter Rachel made an astonishing discovery: they learned the true identity of this monstrous criminal. In turn, they uncovered one of the deadliest serial killers in America. (via Goodreads)

Why was I interested in this book?
So, one of the things I like doing, as research for my historical fiction, is reading old  newspapers. In a 1915 issue of the Omaha Bee I came across a sensational story about an axe murder that had taken place in Omaha. I haven’t quite followed that story to its conclusion—they were still looking for the culprit months later—but I found it to be a compelling case, maybe something for later fiction. After all, axe murders are the things of Hollywood slasher movies, right?

Boy, was I wrong…

While researching another project, I was also looking at small towns in Iowa near railroad tracks. Which led me to the Villisca, IA axe murders in 1912. Oddly, I had never heard of Villisca. I wanted to know more. Among the shallow investigations of the murders was a full-length book about them: The Man from the Train.

What Worked
It turns out there were several spates of axe murders throughout the early 1900s. Villisca was particularly noticed: the whole family, plus a couple of neighbor girls who stayed over, were brutally murdered with the blunt side of an axe. The victims’ faces were covered. The house was found with all the shades drawn, mirrors covered, and locked up tight. Nothing was taken. The house was not far away from the railroad tracks. The things is, when Bill James started looking into this crime, he found that there were other instances of axe murders that occurred that had similar staging. There was a pattern. It was likely that the same man was responsible.

The Man from the Train is a feat of research. At some point in the process, James hired his daughter to help wade through the sources. The string of murders reached back much further in time than expected and led to a possible suspect, who was never caught. That’s only half the story though. How did the Man from the Train get away with this for so long? And what happened in the communities in the wake of such murders? The answers to those questions are often disheartening.

What Didn’t Work
James made a very specific choice on how he presented information. He sort of started with a cluster of information and then works backward and forward from it. In general, I liked this decision. It does give the book a mystery/thriller feel. But I feel like things could have been cleaned up and an reiterated more efficiently. There are a lot of names, places, and dates to keep up with. Maps would have been a big help since we’re dealing with actions over time.

James spends a lot of time trying to convince the readers of his theory. On one hand, a reason that the Man from the Train wasn’t caught was due to what James calls irrational skepticism. Police decided to focus on hastily found suspects instead of looking for patterns or even seeing patterns when presented with them. On the other hand, today’s reader lives in a post-profiling world. The notion that a killer might have a signature pattern is wildly accepted. James didn’t have to convince me. The pattern is there; I’ll buy that acre of land. Continuing with the hard sell was tedious.

Lastly, the tone was occasionally uneven. There were some fourth-wall-breaking comments that were unnecessary.

Overall
Man, history. The more I learn about history, the more I see how much things haven’t changed. There have always been serial killers. There have always been the want for tidy closed cases, especially when murder is involved. The Man from the Train wasn’t an easy read for a few reasons, but the detective work behind it is admirable and the story really is an interesting one.

There was one mistake within the book that I caught: David Abbott (the whole reason I was reading a 1915 newspaper in the first place) wasn’t from Oklahoma, he was from Omaha. I’m going to assume that since Abbott was only mentioned in passing, it was a mistake that isn’t indicative of others unseen.