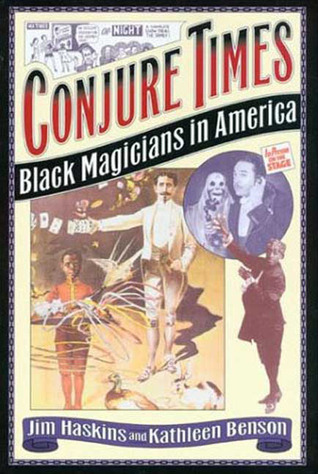 Throughout American history, black magicians have achieved great skill in both the magician’s tricks of the trade as well as the psychology of entertaining an audience. However, because of slavery and, later, racial segregation and discrimination, few have been able to make their living as magicians. Those who have succeeded are rare indeed, and although some have left a mark on history, many exist only as names on old playbills or in newspaper advertisements. Jim Haskins delivers an illuminating portrait of these unheralded pioneers — a tribute to African-Americans who paved the way for and will inspire future generations. (via Goodreads)

Why was I interested in this book?
I’ve been reading about magic history for some time now, but I realized I knew very little about African-American magicians aside from Adalaide Herrmann’s mention of the black assistants in their show. The assistant was known as Boomsky, though several magicians played that part. Indeed, the last of the Boomskies, M. H. Everett went on to have a fairly good career after Herrmann’s death.

What did I learn?
African-American magicians have different career lineages. While some, like Everett, were assistants for white magicians, most learned magic from other black magicians—most of whom are relatively unknown to history. They didn’t learn from the likes of Kellar or Dai Vernon, but rather Alanzo Moore or Clarence Hunter. While it seems that white magicians weren’t opposed to helping and mentoring black students, they just really weren’t available due to different performance circles.

An early stage opportunity for black magicians was as part of minstrel shows. These eventually gained a little more legitimacy as vaudeville shows, but the stages and audiences were still segregated. Black magicians didn’t perform for white audiences because they prevented from doing so. Well, unless they wanted to take the persona of a “Hindoo” illusionist. Many did and made a decent living at it. Eventually, desegregation led to more and more performing opportunities.

There was also a barrier due to types of gaffed products available. For example, the thumb tip is  a versatile tool for many magic tricks, but not if it isn’t available in the proper skin tone.

What more did I want?
Conjure Times is aimed at young readers, so none of the biographies are particularly in-depth. There’s a list of sources that I’m definitely going to check out. Also, it was published in 2001 and deserves a new edition. Not included in the modern section, for example, is Kendrick McDonald, who was the first African-American to serve as the president of the Society of American Magicians.

You didn’t think I wasn’t going to include a video did you?