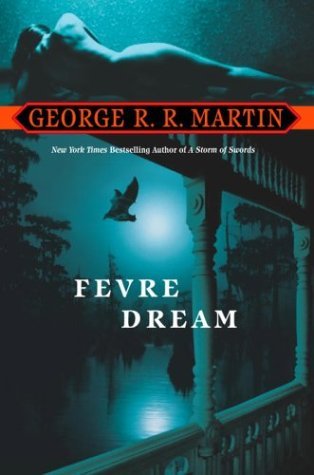 When struggling riverboat captain Abner Marsh receives an offer of partnership from a wealthy aristocrat, he suspects something’s amiss. But when he meets the hauntingly pale, steely-eyed Joshua York, he is certain. For York doesn’t care that the icy winter of 1857 has wiped out all but one of Marsh’s dilapidated fleet. Nor does he care that he won’t earn back his investment in a decade. York has his own reasons for wanting to traverse the powerful Mississippi. And they are to be none of Marsh’s concern—no matter how bizarre, arbitrary, or capricious his actions may prove.

Marsh meant to turn down York’s offer. It was too full of secrets that spelled danger. But the promise of both gold and a grand new boat that could make history crushed his resolve—coupled with the terrible force of York’s mesmerizing gaze. Not until the maiden voyage of his new sidewheeler Fevre Dream would Marsh realize he had joined a mission both more sinister, and perhaps more noble, than his most fantastic nightmare…and mankind’s most impossible dream.

Here is the spellbinding tale of a vampire’s quest to unite his race with humanity, of a garrulous riverman’s dream of immortality, and of the undying legends of the steamboat era and a majestic, ancient river. (via Goodreads)

Why was I interested in this book?
I had heard several times that George R. R. Martin’s vampire novel was quite good. The back cover blurb of my edition is a quote by Harlan Ellison.

In 1990 or so, Anne Rice’s Interview with the Vampire showed up on my mom’s bookshelf via the Science Fiction Book of the Month Club. I have a feeling that it was a “forgot to turn it down” book because my mom didn’t (until then) read horror. We both read it and we both went a bit nuts for it and vampires. We read all of Anne Rice’s books, Fred Saberhagen’s Dracula books (and of course Dracula), just about everything Chelsea Quinn Yarbro wrote, Barbara Hambly’s Those Who Hunt the Night, John Steakley’s Vampire$, and so many others. But George R. R. Martin’s Fevre Dream was no where to be found at our mall’s Walden Books or our public library.

What Worked
Martin does a good job putting a spin on vampire mythology and presenting a vampire who is trying to have a choice in his destiny without being utterly emo about it. Abner Marsh is our outsider-looking-in on this culture/species. He’s crusty and jaded and doesn’t ask too many questions, at least at first. It is his inevitable curiosity that causes him to ultimately care about Julian as well as Fevre Dream.

I really enjoyed the setting. Setting is one of those factors that can make or break a book for me. Reading this in 2019 means I’m experiencing it in the shadow of Interview of the Vampire with its wisteria-clad New Orleans. Fevre Dream is set somewhat in New Orleans, but more up and down the Mississippi River and especially on the riverboat itself. There is also a lot of talk about food. Abner March likes to eat. I can relate and I not-surprisingly appreciated all the food details.

I read part of this book in mass market paperback, but listened to most of it in audio book form. It was read Ron Donachie, who I wasn’t very familiar with, but has been in everything. He does a great job.

What Didn’t Work
There were a couple of really talky parts. I don’t believe that showing is always better than telling, but oof. Past the mid-point of the novel there is section where a good deal of time goes by. Between what Abner did during this time period and his subsequent catch-up with Joshua, there is a very large passage of summing up. I get that it’s necessary, but it’s kind of dry.

While I didn’t have a problem with this, readers might want to be aware that race is a bit of an issue and these are the 1850s. The N-word is used quite liberally, as certain characters would use it. Also, if you have any qualms about child-endangerment, one of the most graphic scenes includes a baby. I don’t dink Martin for this, but I understand that it’s a delicate point for many readers.

Overall
It had been a while since I’d read any vampire fiction. I’m glad Fevre Dream lived up to its reputation, and I should probably loan my mom the book.