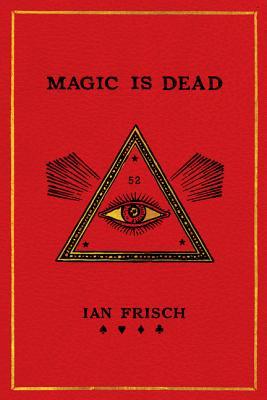 Magic Is Dead: My Journey into the World’s Most Secretive Society of Magicians by Ian Frisch

Magic Is Dead is Ian Frisch’s head-first dive into a hidden world full of extraordinary characters and highly guarded secrets. It is a story of imagination, deception, and art that spotlights today’s most brilliant young magicians—a mysterious club known as the52, who are revolutionizing an ancient art form under the mantra Magic Is Dead.

Ian brings us with him as he not only gets to know this fascinating world, but also becomes an integral part of it. We meet the52’s founding members—Laura London, Daniel Madison, and Chris Ramsay—and explore their personal demons, professional aspirations, and what drew them to their craft. We join them at private gatherings of the most extraordinary magicians working today, follow them to magic conventions in Las Vegas and England, and discover some of the best tricks of the trade. We also encounter David Blaine; hang out with Penn Jillette; meet Dynamo, the U.K.’s most famous magician; and go behind the scenes of a Netflix magic show. Magic Is Dead is also a chronicle of magic’s rich history and how it has changed in the internet age, as the young guns embrace social media and move away from the old-school take on the craft.

As he tells the story of the52, and his role as its most unlikely member, Ian reveals his own connection with trickery and deceit and how he first learned the elements that make magic work from his poker-playing mother. He recalls their adventures in card rooms and casinos after his father’s sudden death, and shares a touching moment that he had, as a working journalist, with his childhood idol Shaquille O’Neal.

“Magic—the romanticism of the inexplicable, the awe and admiration of the unexpected—is an underlying force in how we view the world and its myriad possibilities,” Ian writes. As his journey continues, Ian not only becomes a performer and creator of magic—even fooling the late Anthony Bourdain during a chance encounter—he also cements a new brotherhood, and begins to understand his relationship with his father, fifteen years after his death. Written with psychological acuity and a keen eye for detail, Magic Is Dead is an engrossing tale full of wonder and surprise. (via Goodreads)

Why was I interested in this book?
I’ll be honest, I wasn’t that interested in this book. It was marketed *very* heavily to me on Amazon, which was a little off-putting, due to my purchase history of other magic books. The Amazon recommendation algorithm, combined with the publisher’s marketing push, didn’t really notice that magic history is more my thing. Plus, secrets in magic are sort of bullshit. The aura of secrecy is more important than actual secrecy. So, a super secret society of magicians really isn’t a selling point for me. But, it was available through the library, so I figured, “Okay, fine.”

What Worked
Actually, I’m glad I read it. I learned a lot about how the new generation of magicians are using social media. I knew that YouTube has been changing the way that younger magicians are learning magic. Instead of in-person pilgrimages to meet old masters, many performers are learning techniques from peers via online videos. And of course there is the argument that amateur learning from amateur doesn’t lead to excellence, but that’s not the entire story of what’s been going on in magic in the last decade. YouTube and Instagram are being used more as advertisement for products that these young magicians are creating. Instead of playing vaudeville circuits or being booked as a night club act, series of single trick videos have established these magicians’ brands.

With the title Magic is Dead, I expected a level of irreverence toward the older generations. That really isn’t the case. Performers like Chris Ramsay and Daniel Madison do respect where magic has come from even as they deviate from it. Frisch provides an occasional primer on magic history in the course of the narrative. For me, it wasn’t anything I didn’t know.

What Didn’t Work
Frisch is a journalist and his writing is pretty bare bones. He’s better at telling smaller stories than weaving them into a something longer. I also generally find memoirs by young people to be suspect. No matter how many improbable things might have happened in their relatively short lives, I feel like a good memoir should have a bigger scope. I expected there to be more of a twist or, in faux magic parlance, a turn to his inclusion in the52, but really this is Frisch’s story of finding a hobby, maybe a profession, maybe an art that has led him to some current truths.

But the one thing I really didn’t care for in Magic is Dead (and in Nate Staniforth’s Here Is Real Magic, which I read last year) is the air of self-importance that seems to surround many of the younger magicians. Frisch had been part of the magic scene for two years when he starts working on a trick with the intent to be impactful, not just to innovate, perform and market a trick.  Actually, if you’ll allow me my old curmudgeon hat for a moment, I think this is an aspect that many young people suffer from. Everything must be Special and Important. While most people might what to achieve something of that level, it’s very odd to me and a little distasteful to come out and state, “I’m going to be important in this field.”

Overall
As I said, I did find value in reading Magic is Dead. If you like modern magic, this is a decent read. Frisch does know his stuff. Below is the magic trick he created. I know I recently saw it performed by a different magician, but that’s Frisch’s intent. I also think this is a very talented lot; magic will and already has been impacted by the members of the52.

2 thoughts on “Review ~ Magic is Dead”