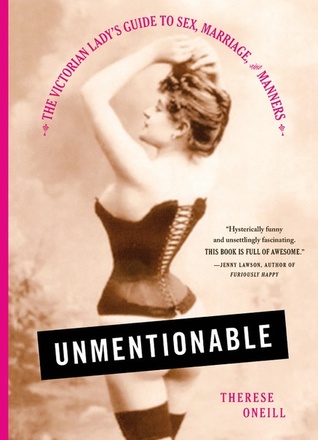 Unmentionable: The Victorian Lady’s Guide to Sex, Marriage, and Manners by Therese Oneill

Have you ever wished you could live in an earlier, more romantic era?

Ladies, welcome to the 19th century, where there’s arsenic in your face cream, a pot of cold pee sits under your bed, and all of your underwear is crotchless. (Why? Shush, dear. A lady doesn’t question.) (via Goodreads)

So, there’s this movie called Kate & Leopold. It came out in 2001, starring Meg Ryan and Hugh Jackman. In it, Jackman’s gentlemanly, but smart Leopold falls through a time hole linking 1876 and 2001 and falls in love with Ryan’s successful, but lonely ad exec Kate. All in all, it’s one of those generally smart, funny rom coms that populated the 90s, but died out in the 2000s. It has a great supporting cast (Liev Schreiber, Breckin Meyer, Bradley Whitford) and a soundtrack song by Sting. I would utterly adore this movie (did I mention Hugh Jackman in a rom com?)…except for the ending. Spoiler for an 18 year old movie: Kate goes back to 1876 with Leopold to stay. She obviously hadn’t read Therese Oneill’s Unmentionable.

I love reading newspapers from the late Victorian era and I’ve been interested in the manners/health books of the era, but haven’t had the time to get into them. Oneill has done that work for me. Unmentionable goes into all the distinctly un-romantic aspects of being a woman (and really a white, upper-class woman) in the late 19th-early 20th centuries. The snarky tone is mostly funny, especially paired with illustrations and advertisement from the period. My one nag is that I wish dates were used a little more. 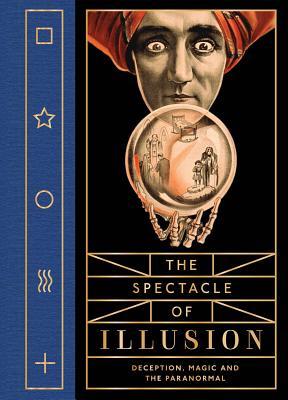 The Spectacle of Illusion: Deception, Magic, and the Paranormal by Matthew Tompkins

In The Spectacle of Illusion, professional magician-turned experimental psychologist Dr. Matthew L. Tompkins investigates the arts of deception as practiced and popularized by mesmerists, magicians and psychics since the early 18th century. Organized thematically within a broadly chronological trajectory, this compelling book explores how illusions perpetuated by magicians and fraudulent mystics can not only deceive our senses but also teach us about the inner workings of our minds. Indeed, modern scientists are increasingly turning to magic tricks to develop new techniques to examine human perception, memory and belief. Beginning by discussing mesmerism and spiritualism, the book moves on to consider how professional magicians such as John Nevil Maskelyne and Harry Houdini engaged with these movements – particularly how they set out to challenge and debunk paranormal claims. It also relates the interactions between magicians, mystics and scientists over the past 200 years, and reveals how the researchers who attempted to investigate magical and paranormal phenomena were themselves deceived, and what this can teach us about deception. (via Goodreads)

The Spectacle of Illusion was published to coincide with Smoke and Mirrors: The Psychology of Magic, an exhibit at the Wellcome Collection in London. (The exhibit is open until Sept. 15th, so if you’re in London and interested, you’re lucky and should go.) The book delves into how from the 18th century through the present we have approached the paranormal (a relatively recent term) from the point of view of science. The problem, though, is that science hasn’t always been good at dealing with human deception. Enter those masters of deception: the magicians. Of special note are the debunkers, like Maskelyne and Houdini, and the modern discipline of experimental psychology which investigates how our brain experiences non-normal experiences like magic tricks and “paranormal” events.

A Goodreads reviewer referred to this book as “specialist” and it occurs to me that I might have read so much on the above subjects that I don’t know what that means anymore. I think Thomkins provides a good introduction to these subjects without going too deep. This book didn’t break new ground in my knowledge base, but I highly enjoyed it.  The strength of The Spectacle of Illusion is the hundreds of pictures and illustrations found throughout. It’s a beautiful book, more on the coffee table book end of the spectrum than dry academic text.