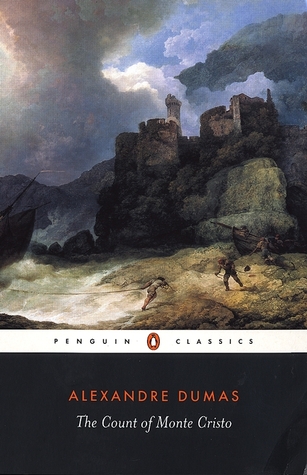 A popular bestseller since its publication in 1844, The Count of Monte Cristo is one of the great page-turning thrillers of all time. Set against the tumultuous years of the post-Napoleonic era, Alexandre Dumas’s grand historical romance recounts the swashbuckling adventures of Edmond Dantès, a dashing young sailor falsely accused of treason. The story of his long imprisonment, dramatic escape, and carefully wrought revenge offers up a vision of France that has become immortal. As Robert Louis Stevenson declared, “I do not believe there is another volume extant where you can breathe the same unmingled atmosphere of romance.” (via Goodreads)

The Count of Monte Cristo was one of those books that, despite everyone else having read it and loved it in high school, I had never been required to read. Honestly, I’ve never been required to read any Dumas and picked up The Three Musketeers for fun in college. But everyone kept telling me that The Count of Monte Cristo was Dumas’ better book. And it is!

I also hadn’t ever watched an adaptation of the novel, so I didn’t know what to expect. I knew there was revenge, but I expected more of the “My name is Inigo Montoya; prepare to die!” swashbuckling-style of revenge. Instead, Edmond Dantès revenge is an intricate puzzle that envelopes generations. It’s melodramatic and delicious. I have no idea how you’d manage to do it well in a movie. While there is some musing on the righteousness and awfulness of revenge, much of this book is just so sensational, so “popular literature.” And occasionally, The Count of Monte Cristo feels a little padded out as Dumas (and his probably collaborator Auguste Maquet) wrote for serialization.

I read this as part of Nick’s Chapter-a-day Readalongs and that was a great way to experience the story. I had made reading The Count of Monte Cristo part of my morning ritual for over 100 days and I miss it! I sought out Robin Buss’ translation. I’d read the first chapter in the commonly available public domain translation and it was just a little too stilted. There are also many abridged editions out there—I own one of them and have it around here somewhere. I wonder what parts you’d leave out of this tale…

2 thoughts on “Review ~ The Count of Monte Cristo”