For the past year, I’ve been reading through issues of The Black Cat, a magazine that began publication in October of 1895. It might sound a little sadistic, but I wanted to read popular literature from the turn of the 19th century, but not just “the good stuff” that has survived to be anthologized. Some of the stories I’ve read in the past year were not very good. Some were very…problematic. And some were quite good. Not all the stories were speculative, but many were and almost every month included a “spooky” story. I figured October would be a good time to share some of my favorites. Below are links to five stories and I’ll post another five later in the month.

Our unnamed narrator rents the Chateau Blanc in hopes of curing his melancholy. The house appealed to him due to the strange picture of the previous owner that hangs in the bedroom and the stuffed pet swan that somewhat floats on the lake. He’s sure there is a mystery to these objects…

Link to “The Secret of the White Castle” by Julia Magruder

Our narrator assures us that he never would have thought to go into the house if the lady he were with hadn’t confidently let herself in. They go upstairs and sit down to dinner. Around the table are a group of strange characters including a man that our narrator thinks is his old friend, Bill, from college. Except Bill has been dead for eight years…

Link to “The Interrupted Banquet” by Rene Bache 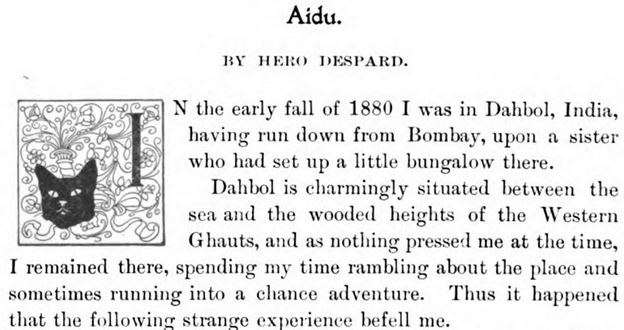 Our narrator falls in love with the beautiful Aidu. When he meets her she seems to be in some trouble. She agrees to help (and later to marriage), under the condition that she be allowed her freedom and she not be followed when she leaves the house. Aidu is a strange woman; she is never seen eating and once a week she goes for a walk alone and returns re-invigorated. Of course, we know how this story goes. Our love-struck narrator, follows her one evening…

Link to “Aidu” by Hero Despard 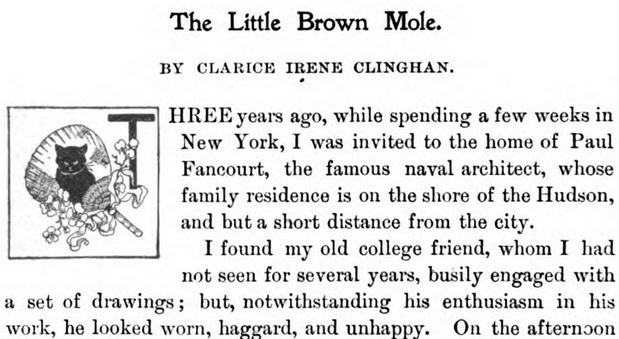 A friend finds Mr. Paul Fancourt in a state. What’s wrong? Fancourt tells of his marriage to the lovely and tempestuous Leila. His wife’s temper drove him away for five years and, when he returned, Leila was a different woman. Possibly, quite literally.

Link to “The Little Brown Mole” by Clarice Irene Clinghan

It’s a “very attractive modern house with a history.” The (presumably) first owners of the house die mysteriously, leaving behind a tale and ghosts.

Link to “To Let” by Alice Turner Curtis

Find out more about the Black Cat Project