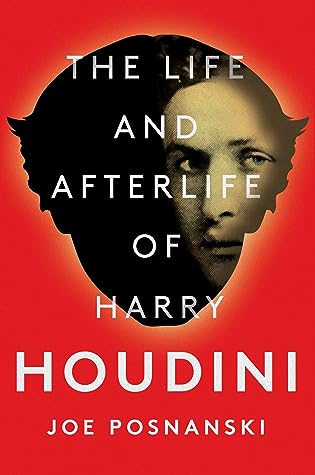 The Life and Afterlife of Harry Houdini by Joe Posnanski

Nearly a century after Harry Houdini died on Halloween in 1926, he feels as modern and alive as ever. The name Houdini still leaps to mind whenever we witness a daring escape. The baby who frees herself from her crib? Houdini. The dog who vanishes and reappears in the neighbor’s garden? Houdini. Every generation produces new disciples of the magician, from household names in magic like David Copperfield and David Blaine to countless other followers whose lives have been transformed by the power of Houdini.

In The Life and Afterlife of Harry Houdini, award-winning journalist and #1 New York Times bestselling author Joe Posnanski enters Houdini World to understand why the magician still enthralls people. Posnanski immerses himself in Houdini’s past and present, visiting landmarks, museums (including one owned by Copperfield), attractions, and private archives. Filled with false histories and improbable facts, Houdini’s life is an irresistible contradiction. His sweeping afterlife is no less fascinating.

Why Did I Choose This Book?
I’ve been reading books about magic for the past seven or so years. I feel like I’ve read *so many* Houdini biographies, but I really haven’t. Early on, I realized that I don’t really like Houdini very much. That may be because one of the first magic books was Hiding the Elephant and its author, Jim Steinmeyer, isn’t the biggest Houdini fan either. Mostly my focus has been on Houdini’s investigations into fraudulent spiritualists, but every book seems to include a biography anyway… So, why did I bother with this book? Joe Posnanski is a sports writer. I wanted to know what his take might be.

What Did I Think?
I really enjoyed this book. Yes, it is a biography of Houdini, but around it, Posnanski asks, “Why Houdini?” Why is Houdini known, at least as a word, to nearly *everyone* nearly one hundred years after his death? Why is he the inspiration for so many modern magicians? Why was he name-dropped in the horror movie I’m going to review after I review this book?

Posnanski, as a magic enthusiast as well as a sports writer, was intrigued by the GOAT status of a magician who by many accounts wasn’t that good of a nuts-and-bolts magician. Houdini was a tenacious and shrewd promoter. As an escapologist, he was a consummate showman. He made his myth and was a bulldog about it being truth. Posnanski isn’t interested in exposing Houdini’s tricks, but he does debunk some of Houdini’s tales.

The other thing I think Posnanski brings as a sports guy is his interest in the fans. He brings in stories about John Cox and Patrick Culliton and many of the other magic enthusiasts who pick at every detail of Houdini’s life and career. And one thing holds true for me: I really do enjoy reading about/listening to people discussing things they love—even when I don’t fully engage in that fandom.

3 thoughts on “{Book} The Life and Afterlife of Harry Houdini”