Shockingly, I announced a TBR near the beginning of the month and haven’t read anything from it. I should possibly always find/replace “books to-be-read” with “book-I’m-not-going-to-read-yet.”

This book was provided to me by Andrews McMeel Publishing via NetGalley in exchange for an honest review. 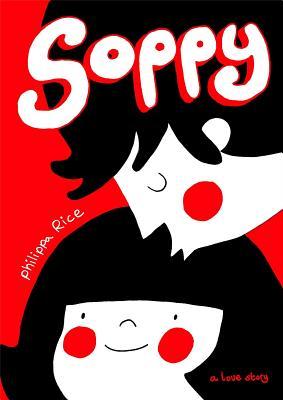 The wildly popular web comic SOPPY–with more than half a million notes on Tumblr–is the illustrated love story of author Philippa Rice and her real-life boyfriend. True love isn’t always about the big romantic gestures. Sometimes it’s about sympathizing with someone whose tea has gone cold or reading together and sharing a quilt. When two people move in together, it soon becomes apparent that the little things mean an awful lot. The throwaway moments in life become meaningful when you spend them in the company of someone you love.

SOPPY is Philippa Rice’s collection of comics and illustrations based on real-life moments with her boyfriend. From grocery shopping to silly arguments and snuggling in front of the television, SOPPY captures the universal experience of sharing a life together, and celebrates the beauty of finding romance all around us. (via Goodreads)

From the beginning of November until mid-February, it’s difficult to miss a certain type of TV and radio commercial (at least here in the US). It’s the holiday season and it is assumed that every woman wants not only expensive jewelry as a Thinkgiving/Christmas/New Year/Valentine’s day gift, but the *right* jewelry. Any man foolish enough to not purchase the correct ring/necklace/bracelet/earrings isn’t worthy of the woman’s love. These commercials annoy me because they don’t give either party enough credit. Sure, getting a gift is nice and all, but 99% of being with someone isn’t about the baubles. It is, instead, like Soppy.

Soppy is Philippa Rice’s simple two-color comic.  It’s sweet and quiet and all about those moments that fill living with someone. There’s no hard-fast narrative here, but a reader gets the gist. Two single people with already okay lives meet, court, and move in together. Sometimes thing are great, sometimes they’re not, but the power of pickles and vanilla shakes prevail.

I was unfamiliar with Rice’s online presence. That’s not the case anymore. Soppy is the lovely antithesis of every annoying jewelry commercial that clutters up the holiday season. 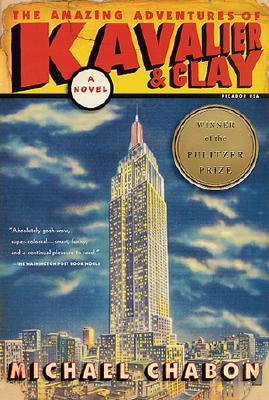 Joe Kavalier, a young Jewish artist who has also been trained in the art of Houdini-esque escape, has just smuggled himself out of Nazi-invaded Prague and landed in New York City. His Brooklyn cousin Sammy Clay is looking for a partner to create heroes, stories, and art for the latest novelty to hit America – the comic book. Drawing on their own fears and dreams, Kavalier and Clay create the Escapist, the Monitor, and Luna Moth, inspired by the beautiful Rosa Saks, who will become linked by powerful ties to both men. With exhilarating style and grace, Michael Chabon tells an unforgettable story about American romance and possibility. (via Goodreads)

I bought my copy of Kavalier & Clay in 2010-ish soon after reading Chabon’s excellent Sherlock Holmes tale The Final Solution. I remembered Kavalier & Clay being critically lauded, even though I don’t put a lot of stock in such things, but I didn’t really know what it was about. I had a notion that it involved the golden age of comics but was surprised when a recent friend told me that one of the main characters has some magic/escapist training. When I bought the book my interest in magic was at a low, but it seems that even when I read book summaries, I forget them before reading the book.

I like this book a lot. It may be that I’m not the best objective judge of Kavalier & Clay because there are so many individual parts that I was going to like.

This is also a WWII story, but from the American side. It’s devastating to Joe to not be able to help is family. In domino effect, Joe’s reactions affect everyone around him. How many of these stories played out during WWII that haven’t been told?

One thing that I disliked were the tragic love story parts. I know that they work for the story. I know that Chabon isn’t just torturing his characters. I know that bliss is the opposite of drama.  But, man, I hate it when you know that happiness is being set up for tragedy.

Despite my pet peeve, The Amazing Adventures of Kavalier & Clay is a great book. After 600+ pages, it ended too soon.

Finally started reading this book due to the Estella Project, but didn’t finish it in time.

Katrina asks: How often do you re-read books? What does it take to make you re-read?

Funny thing, I joined a “Read Me, Baby, One More Time” challenge, thinking I could easily toss in a monthly re-read, but it hasn’t happened! Too many new books have come my way this year. I am re-reading, slowly, A Game of  Thrones and the rest of George R. R. Martin’s Song of Fire and Ice.

Why re-read? Sometimes it’s just the enjoyment of the book. I re-read Paul Kidd’s Greyhawk novels because the make me laugh. I re-read Ray Bradbury and Peter S. Beagle and Harlan Ellison because they write so beautifully. I re-read Shakespeare to puzzle through the language. I re-read Helene Hanff because I have to have a role model in writing that it wry and witty and loves books.

Most often, I re-read to learn about writing. If I want to know how to write a great opening chapter, I pick up Robert Jordan’s The Eye of the World. Tension? Shirley Jackson’s The Haunting of Hill House (hmm, might re-read that…). Action? Maybe some Richard Laymon or one of the Horus Heresy books. I’m always on the look out for pieces to pick apart, analyze and put to work.

When I was at the library most recently, I ended up by the graphic novel and comics shelf. I figured, “What the heck!” and checked out a couple collections. Due to the library being, well, the library I ended up with a sort of random selection.

Yep, that’s right, Book 2. (It wasn’t exactly easy to tell what volume it was anyway…) But it’s X-Men. I’ve read a little X-Men in the past, so I know vaguely what’s going on.

I was again reminded how similar comics are to daytime soap operas. In some ways they are produced in a similar manner. A certain quantity of material needs to be produced within a relatively short period of time. Story lines are alternately highlighted and then shuffled to the background. Occasionally, quality suffers. And you can kind of drop in at any point and time and just go with the flow, but you won’t get a very satisfying experience unless to spend a good deal of time in the world.

Book 16b – The Sandman: Endless Nights by Neil Gaiman

I’ve read a little Gaiman in the past, but no Sandman. This collection is a group of stories about other characters in the mythos. Each section is about a different Endless, illustrated by a different artist. Again, I just had to jump in and go with the flow. The art is at best gorgeous and at worst appropriate to the story.

I have a feeling that I wouldn’t necessarily like other The Sandman books, because there are a couple of the Endless that I really like that I don’t think are very influential to the rest of the stories. (It’s kind of like when I started watching Heroes again just because of Christopher Eccleston and then realized he was only in three episodes.)

In any case, both of these collections were a nice change of pace as I switch to a winter groove.

Book I’m giving up on:

Doc by Mary Doria Russell. I don’t know how to read this book. It’s not a biography, it’s fiction based on a real man, John Henry “Doc” Holliday. And I would rather it be a biography or a narrative in the style of Erik Larson’s books. Larson takes primary sources and weaves them into a compelling narrative. I guess my point is, all I know of Doc Holliday is penny dreadful fiction so why do I want to read another fiction?