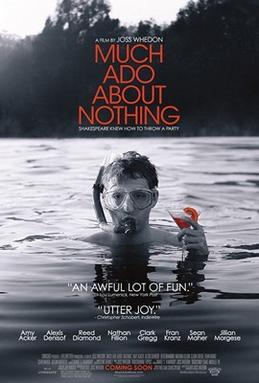 Much Ado About Nothing (2012) – Directed by Joss Whedon, Starring Amy Acker, Alexis Denisof, Fran Kranz, and most of the rest of the Whedon Universe.

Yesterday, we trekked up to Scottsdale to watch Much Ado on the only screen where it’s showing in the Phoenix metro (at the moment, that I know of; here’s hoping for a wider release later in the year). Much Ado About Nothing is my favorite Shakespeare comedy. Joss Whedon is one of my favorite directors.  There was no way I wasn’t going to like this movie.

Filmed on location in his home during a break while editing Avengers, Whedon puts together a pretty good film. Shot in black and white, it exchanges the Italian providence of Messina for a palatial Santa Monica home. The house’s architecture and the surrounding property is put to excellent use. I was amused by how many early scenes were shot in the kitchen. After all, isn’t that were most parties end up? The adaptation mostly pulls off a modern setting while retaining the language of the play in a slightly abridged version. Don John and his cronies arrived zip-tied. Why? It doesn’t matter. Shakespeare never explains either aside from Don John being “a plain-dealing villain,” played with proper malevolence by Sean Maher.

Beatrice and Benedick’s past is more explicitly illustrated to give their current sparring more weight. This mostly works. I found Alexis Denisof’s Benedick a little uneven. His shift from lady-killer to love’s fool is maybe too extreme. Both Kenneth Branagh and David Tennant (in the adaptations I’ve seen) give Benedick a more inherent ridiculousness that makes the character’s shift more natural. I have to give Denisof credit though for doing his Act 2, scene 3 soliloquy while on a morning jog.

In general, Whedon’s adaptation is less jolly than Kenneth Branagh’s 1993 film or Josie Rourke’s 2011 stage adaptation (available through Digital Theatre). Denisof and Amy Acker have some nice physical comedy moments, but other than the eavesdropping scenes, they are both somewhat staid. Nathan Fillion’s Dogberry is the most reserved I’ve seen; I could have done with a touch more 80s super-cop from him and Tom Lenk as his sidekick Verges. The standout of the cast for me was Clark Gregg’s Leonato. Without even a on-stage, but mostly non-speaking wife/mother (like in Rourke’s presentation), Gregg’s Leonato and Jillian Morgese’s Hero have an us-against-the world feel about them; that maybe Leonato was wronged by his wife, leaving him to bring up his daughter as best he could. When Hero is accused, Gregg’s Leonato is first disappointed and then angry, and it’s this disappointment that breaks Hero’s heart. At least that’s my take on it. It could be that I’m indulging in a little to much extra reading into the performance.

This is the most Wheadon-y Shakespeare possible. All of Joss Whedon’s TV series contain labyrinthine and melodramatic love stories and that’s what Much Ado About Nothing has in spades. While it’s not may favorite adaptation of the play, I enjoyed myself.

Throwback Thursday is a weekly meme hosted by The Housework Can Wait and Never Too Fond of Books!

Much Ado About Nothing by William Shakespeare

Set in a courtly world of masked revels and dances, this play turns on the archetypal story if a lady falsely accused of unfaithfulness. Villainy, schemes, and deceit threatens to darken the brilliant humor and sparkling wordplay–but the counterplot of a warring couple, Beatrice and Benedick, steals the scene in Shakespeare’s superb comedy of manners (via Goodreads)

That above is a somewhat edited version of the Goodreads summary because otherwise the entire story is given away. This is my favorite of Shakespeare’s comedies. As many times as I’ve read it or seen it, it always amuses me with its language and its meta plot. Throughout most of the play, Shakespeare seems to be poking fun at himself. It has laughs. It has tears. It has a heroine named Hero.

The first version I saw was Kenneth Branagh’s 1993 film adaptation:

And I’m pretty stoked for the Joss Wheadon version:

I’d also like to mention Shakespeare in the Cinema: Ocular Proof by Stephen M. Buhler as an additional Throwback and a shout out to one of my favorite college professors.

His classes, even the one on Milton, were always a mix of popular culture, music, and general lit-geekery. I was very lucky in my education to have rarely encountered forbidding literature teachers. Most were willing riff on whatever themes students saw in classic works instead of forcing one interpretation on us. Dr. Buhler is one of them best of them.